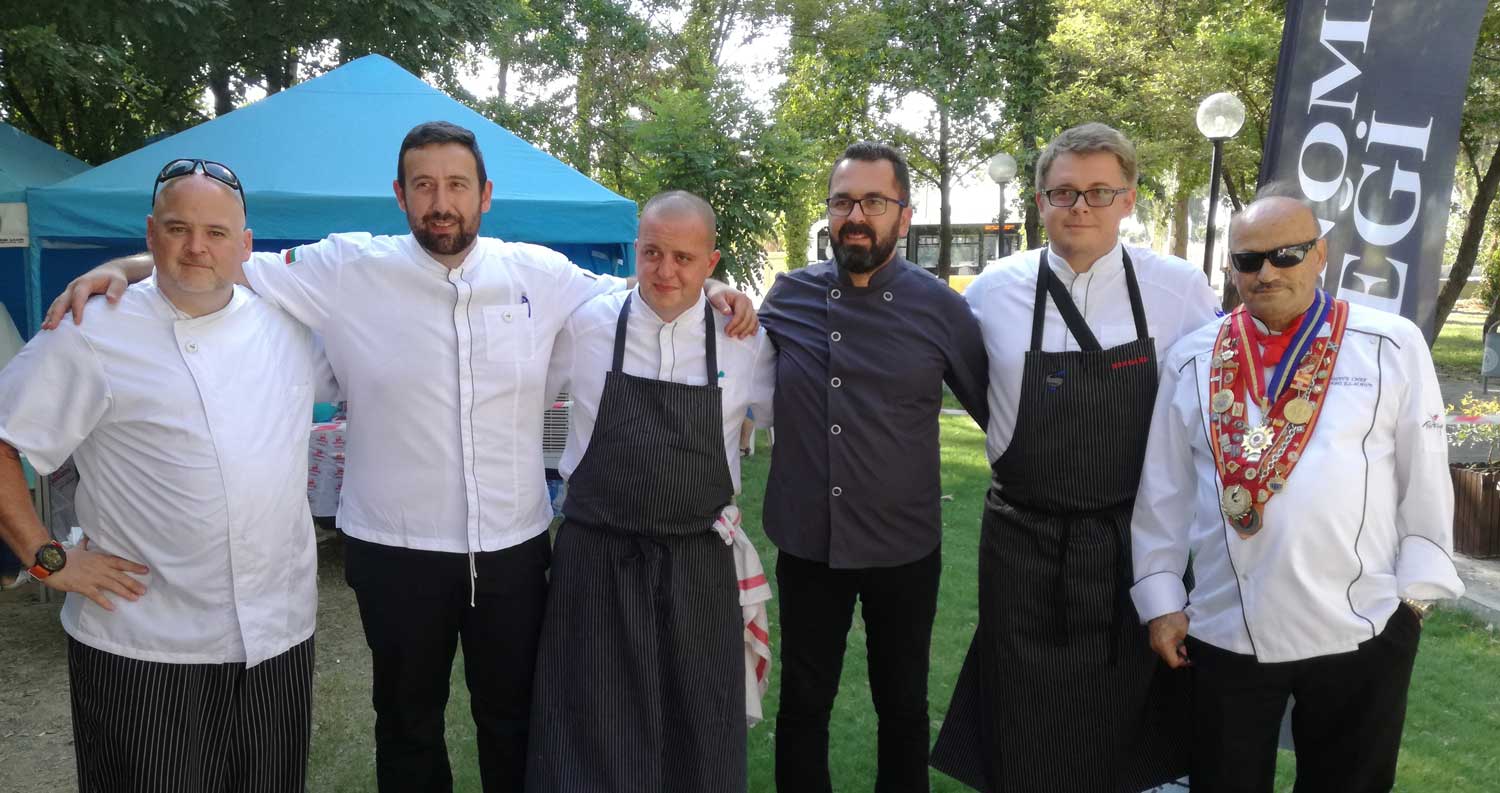 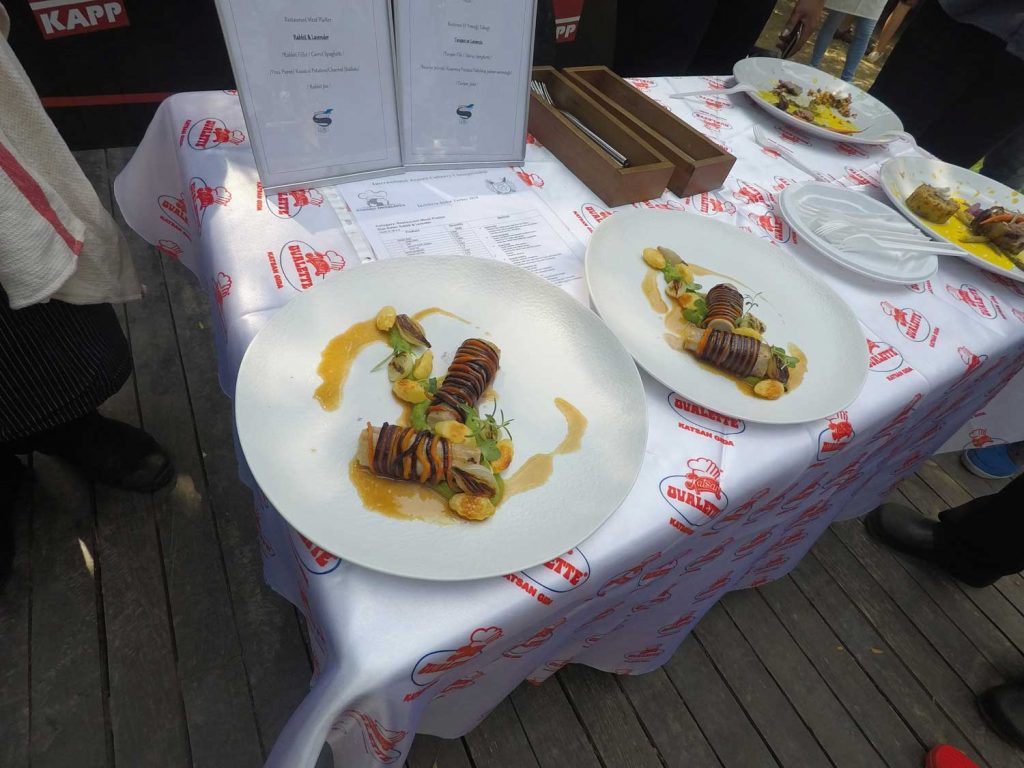 In the period 4-6th September, an International competition in Culinary Arts was organized with the support of the Turkish professional associations in Izmir and Aydin. The event took place in the suburbs of Aydin, near Izmir and participants from Bulgaria, Turkey, Egypt, Mexico, Palestine and Canada were registered for it. 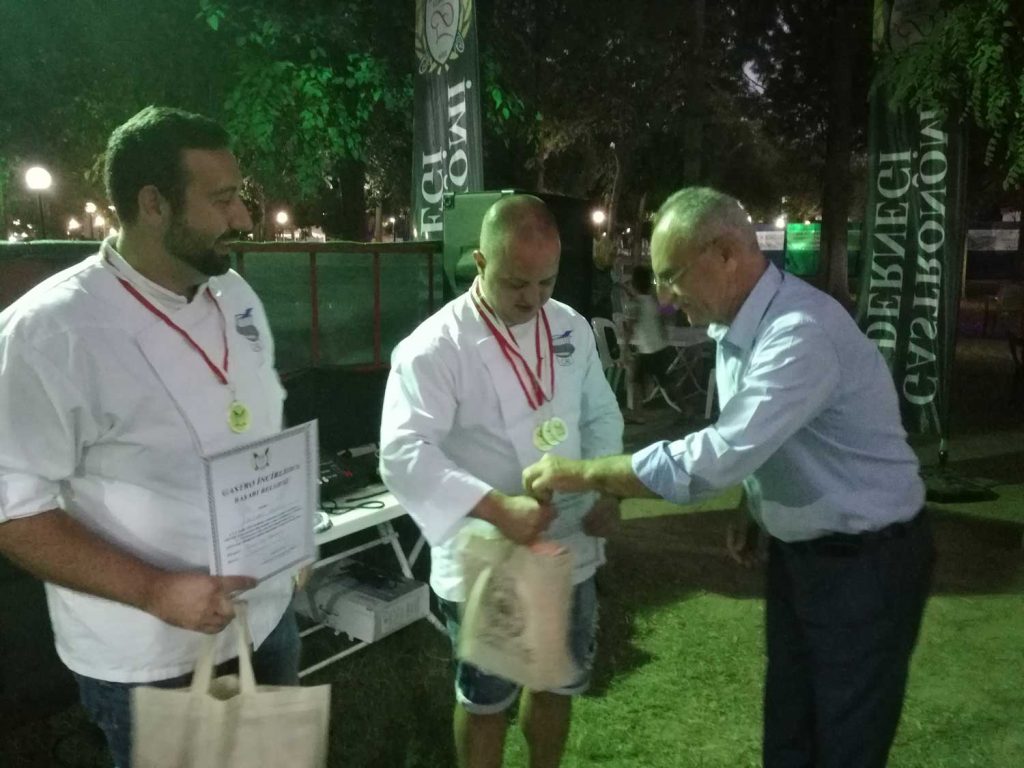 The Bulgarian representatives were the chefs instructors from the Culinary Arts Institute at Varna University of Management (in Varna) – Chef Stanislav Kubarev, Chef Kaloyan Kolev and Chef Vasil Yakimov. They competed in 7 different categories: Poultry dish, Desserts, Starter, Two to tango, Pasta dish, Fish dish, Meat dish. The judges were professional Greek, Mexican, Egyptian and Turkish Chefs, who assessed 53 different participants in all the categories, in front of hundreds of visitors in the 300-hundred-thousand city of Aydin. The judges were impressed by the dishes of all our representatives and noted they were standing out with high professionalism, level of hygiene as well as with their own signature formed through their experience in Michelin Star restaurants. The greatest euphoria among the jury was provoked by the dessert of Chef Vasil Yakimov – Bulgarian yoghurt with Rose gel, Hibiscus biscuits, caramelized figs and white chocolate sand.

Among the participants, there were competitors – students from universitites, professional chefs and chef instructors from Culinary schools. As part of the event, a tent camp was organized with sections for short courses in pastry and bakery. The opening ceremony was hosted by the mayor of Incirliova, Aydin – Mr. Gursat Kale, who awarded the medals to the representatives of the Bulgarian university. Chef Kaloyan Kolev took the gold with his starter „Cured Salmon fillet with avocado cream and pickled red onion“, in a team with chef Vasil Yakimov, as a starter they prepared ‘Cured Seabream with micro herbs, hazelnut sand, vegetable vinaigrette and coral vermicelli‘ and for the fish dish – ‘Pan seared Seabream with purple potato puree, sugar snap peas and Sparkling wine‘. Chef Vasil Yakimov won three gold medals for the dessert, which was applaused by the judges ‘Bulgarian yoghurt with Rose gel, Hibiscus biscuits, caramelized figs and white chocolate sand’, for Meat dish ‘Rabbit fillet with lavender, Carrot spaghetti, peas puree, roasted potatoes and charred shallots’ and in a team together with Chef Kaloyan Kolev. Chef Stanislav Kubarev took two gold medals in the categories for preparing poultry and pasta dish – ‘Duck Margret with figs, Endive and Orange pearl couscous’ and ‘Open seafood Ravioli a la Puttanesca’.

We are reminding that Chef Vasil took the first place for professionals at the national Culinary cup in 2018 in Plovdiv, while, Chef Kaloyan, together with his students from Honduras and Ireland, took the 2nd place as a team.