Chef Hugues Boutin: the experience of an international judge at the Student culinary competition in Bolu, Turkey 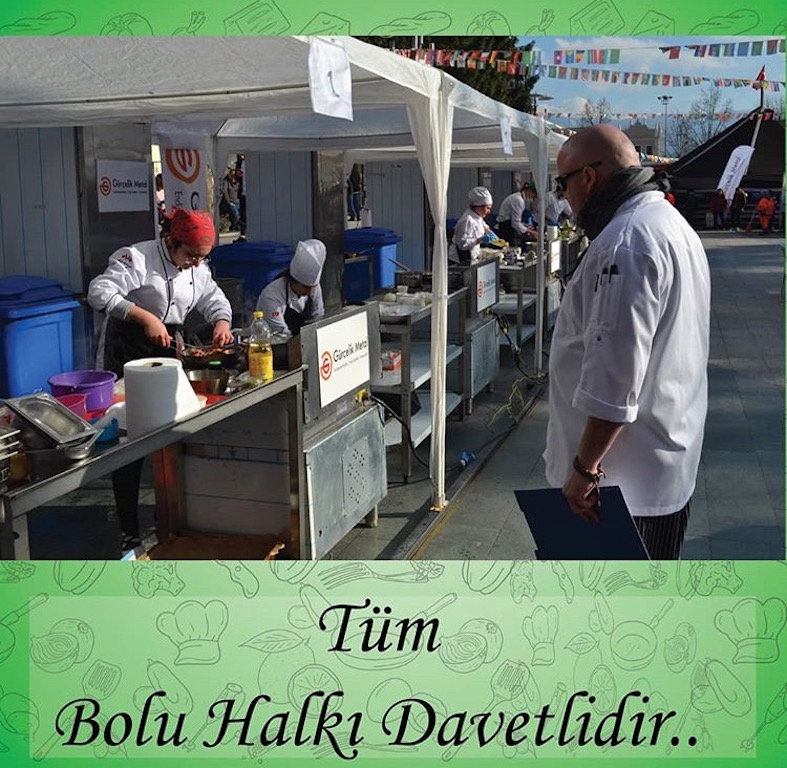 Our Programme Director, Chef Hugues Boutin just returned from Turkey, where he was invited as an international guest judge of the 5th Bolu Student Culinary competition, known as “Bolu 5 Uluslararasi Mutfak Günleri 2019”

“What an amazing adventure it was!” shares Chef Hugues. You can read below what he shared with us upon his return:

“The competition had 3 days to go, with about 350 participants from 3 countries, such as Turkey of course but also Greece, Israel and judges from Slovenia, Ukraine, Macedonia, Mauritius, Russia, Canada and Bulgaria.

It was under the WACS umbrella (World Association of Chefs Societies), it had numerous categories with meats, Fish, pasta, traditional, ottoman cuisine, team black box for High school and another one for Universities. It also had a category for Culinary arts which were cakes and decorations.

We arrived in Bolu at 2 in the morning after a long trip from Istambul. The trip started on a great note because just before we left Istambul to Bolu, we all got together (. The Chef Judges) in the restaurant of one of the chef from the Turkish Chef’s association, at “Burak Kuru Fasülye” from Chef Metin Dinçer, where I had an amazing beef soup, made from a simple roux from rendered beef fat, flour and white beef stock, garnished with beef meat…. Amazing dish, on a cold night from an amazingly charming chef who is self-taught. Following that soup, I had great BBQ’d lamb ribs and some wonderful pilaf rice also made form rendered beef fat. I finished my first meal there with a rice pudding that reminded me of a cross between a crème brulée and the aforementioned rice pudding and also a small plate of sugar-confited pumpkin…. I also met some of the most charming and welcoming people that night. What a great opening for the coming days.

The next morning, we were ready to go to the event and I chose to go simply in my chef jacket and a sleeveless puff jacket. I should have listened to my friend Esma Tezcan, who was right about getting something warmer….

That first day started with Traditional cuisine, which was a real treat, were I discovered many new flavours and ideas. I was tasked with being a Marshall judge during the whole weekend. This means that I was responsible to make sure the timings were respected, that the contestants were not cheating by bringing in already fabricated or transformed products and also that I was responsible for scoring on the technical part and the hygiene part.  We were 2 Marshalls during the whole event, chef Rüstü Ekmen (kitchen coordinator at ULUSLARARASI GASTRONOMI KLÜBÜ) and me, except for the last day for the team black box where we had 2 translators that joined us and that we trained on specific points to check. Being Marshalls is hard work, as you don’t really stop because once a round finishes, you have to make sure the kitchens are cleaned fast to not lose time for the next ones.

It was cold, cold day but it was a really good one; after the Traditional cuisine, there was the dessert and the chicken (which we postponed for the next day as it was already late when we were half-way through the desserts.)

Following this, we went straight to the opening gala dinner where we were attended by students from a local culinary high school, where after the speeches by the mayor, the local running election candidate and some others, we had some great home cooked, comfort food with choices of soups, great lamb dishes, a good variety of rice and vegetables, and some really good breads. Of course, their Baklavas were really, really, really good! Great way to finish the day, because we knew it was a bigger day coming up on Saturday.

After a team breakfast with all the judges at the hotel where went over some directives from the head judge, Chef Iztok Legat from Slovenia and chef Alan Payan from Mauritius, we were off to a fun day. Having learned the way the day before, I was prepared this time with a warm jacket, scarf and my work boots and the CAI jacket that is so comfy and warm!

This day we added one more meat round and also a round for disabled cooks. This was an eye opening and mind-blowing event, because we, as cooks, take our jobs too seriously sometimes and it becomes too competitive but to see these kids (and some grown-ups) having a blast and cooking with such huge smiles on their faces…. It made me re-evaluate what I do and how I do it.

After a quiet Saturday evening, we were off for the last day of work, with the Ottoman cuisine the Pasta and the Team black box, which is the biggest and most fun to watch event. The weather was even better than the previous day, when. We managed to work with just the Chef whites on. This Sunday, we had some warmer weather and we worked longer in just the whites. (Free tip for you: Always carry an extra set of whites, you’ll need it!)

The main event of the day was the Team black box, where they could only use what was in the box. Nothing else was allowed. The 2 main proteins were a Seabass and a 3-ribs rack of lamb. They had to fabricate the seabass and the lamb any way they saw fit (to fabricate is to transform to cook, such as removing the silver skin on meats, the spines and various flippers on fishes, etc).

They only had 90 minutes to do so and with a specific timing to respect (Starters had to be out after 60 min, Mains after 75 min and desserts by 90 minutes). Considering the levels of the students (13 teams of high schools and 7 of Universities), it was interesting to see the final results. The bad part is that I did not have time to get the pictures of the dishes, as the Marshalls had to check all the kitchens at the start and the end to make sure it was cleaned correctly.

We finished the day with a big closing gala dinner where the winners of the day’s events were announced and rewarded. We also received as judges a diploma for our work and some wonderful prizes all from the suppliers of the events.

We then headed back to the hotel to pack and go to the airport in Istanbul as some of us were flying early the next morning.

I wish I had taken more time over time to visit but we worked non-stop every day. We were lucky to have people such as Esma, Chefs Nayem and Metin and also lots of Culinary students such as Ayşegül and Canşel and our translators, Yiğitcan Gül and Hüseyin Burak Ekseli, to help us out. I am very, very thankful to my fellow Marshall, chef Rüştü who did an amazing job.

The few things I took out from this, besides the warmth of the Turkish people I met and worked with, and the local food I had the chance to sample is this:

>The techniques you learn as you grow, as a chef, are important but more so when you just start as a young cook. Forget all the fluff of the plating with tweezers, with smoking a dish for no reason other than it being cool.

The techniques you learn will make you into a better cook as you grow through your years as a professional chef. I am lucky to have had great stern and difficult chefs to please as I grew up in this business and this explains why I’m so grumpy and difficult to please sometimes.

The techniques you learn as a young cook will be with you your whole career and these will allow you to be more efficient and better at your craft, no matter what you do.

>Do it right the first time, every time.

Hard work pays up at the end! I saw a lot of hard work over there, work from the heart, coming from kids that did not have much to work with. They did not have fancy Japanese knives, no rainbow-colored tweezers to plate their dishes, some only had chef’s jackets with a bandana for a hat. But I saw kids working hard, trying to make it happen on their own and THAT made me smile, to see them focused so very hard and much that they forgot to smile or ignored us when we asked them a question.

I learned a lot from great chefs over there such as chefs Iztok and Alan, and a lot from all the Turkish chefs I had the chance to work with. Chef Sadullah organized the whole competition and it was a great job, well done for him and the team that helped him. All the students who helped us (our translators Yığıtcan & Hüseyın, Canşel, Ayşegül, Burak): Thank you for teaching me so much this weekend.

I realized something I had been thinking about for a while now; We are always learning new things, new thoughts, new ideas. We are always students, our whole career. All we have to do is actually want to and open our minds to it.

I came back with many ideas for our students, many things we have to work on and get better at.

See you on the road again somewhere. 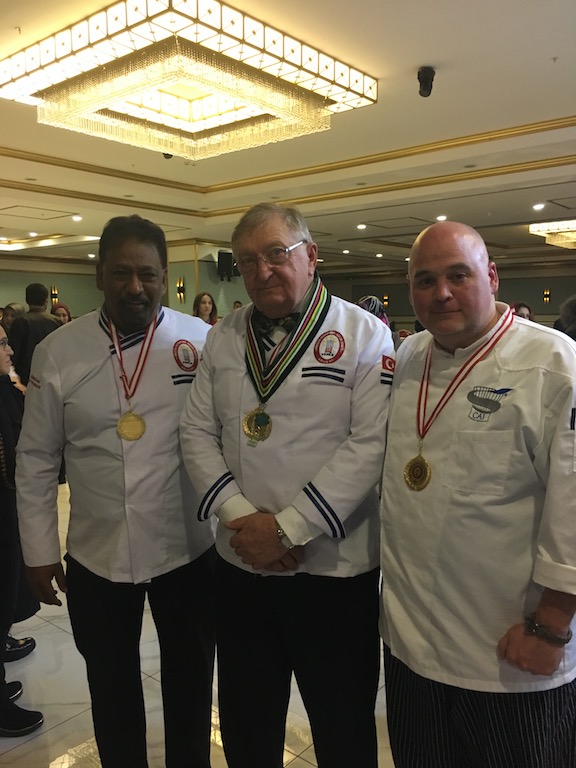 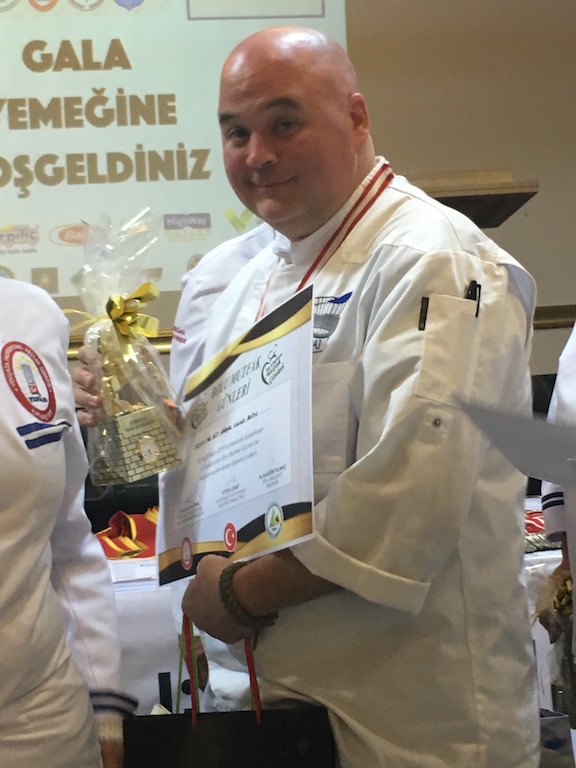 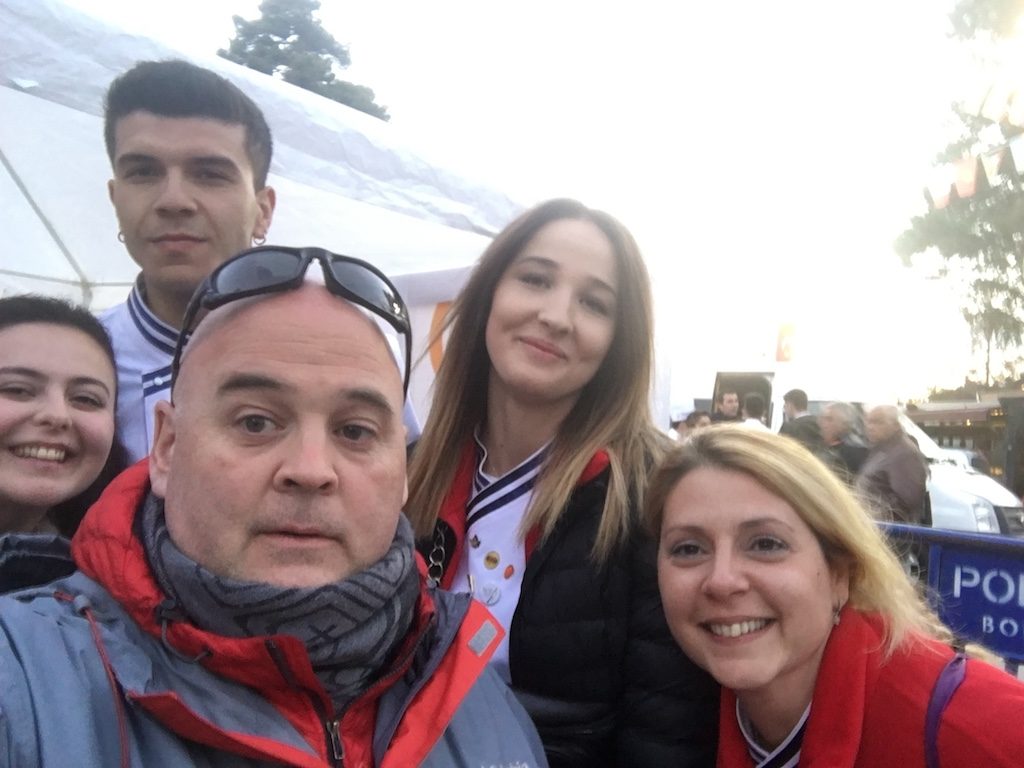 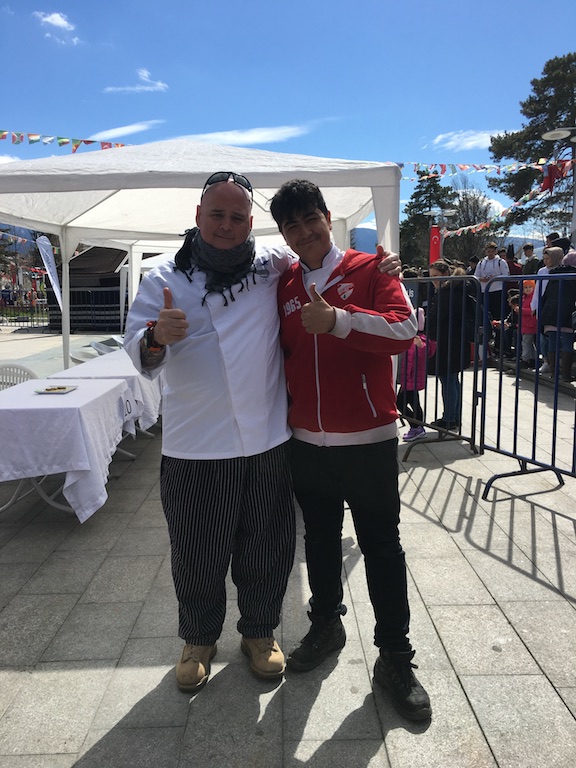 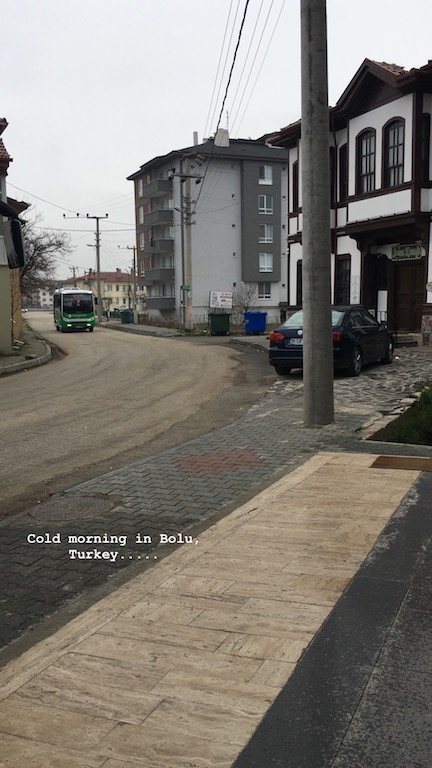 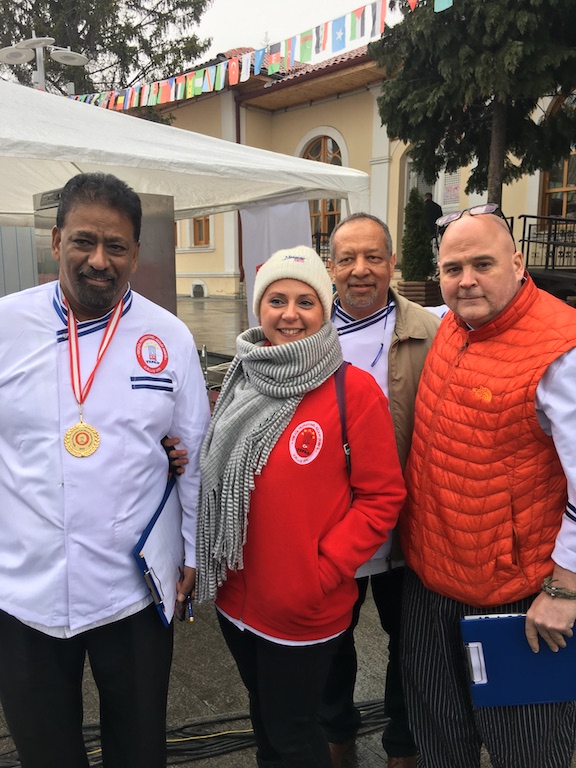 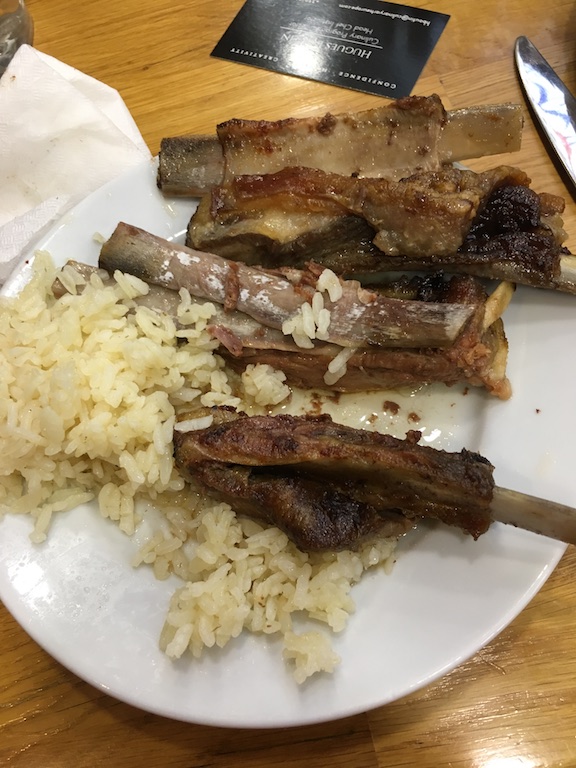 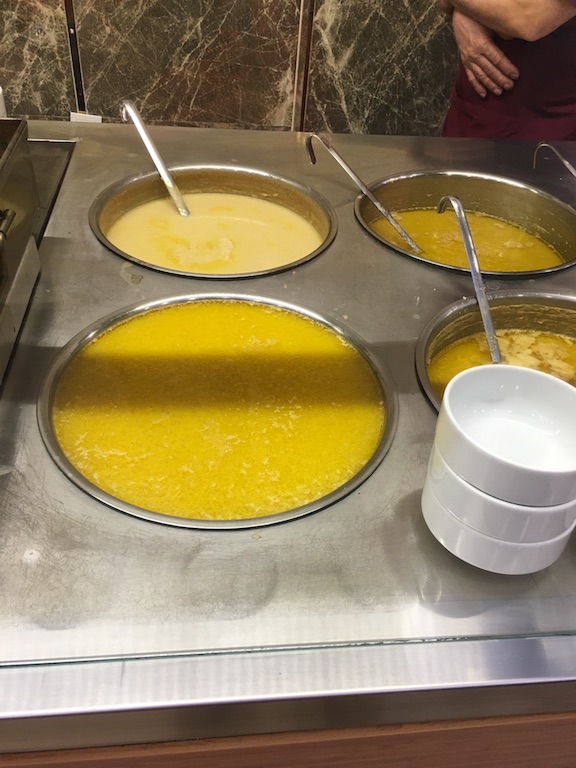