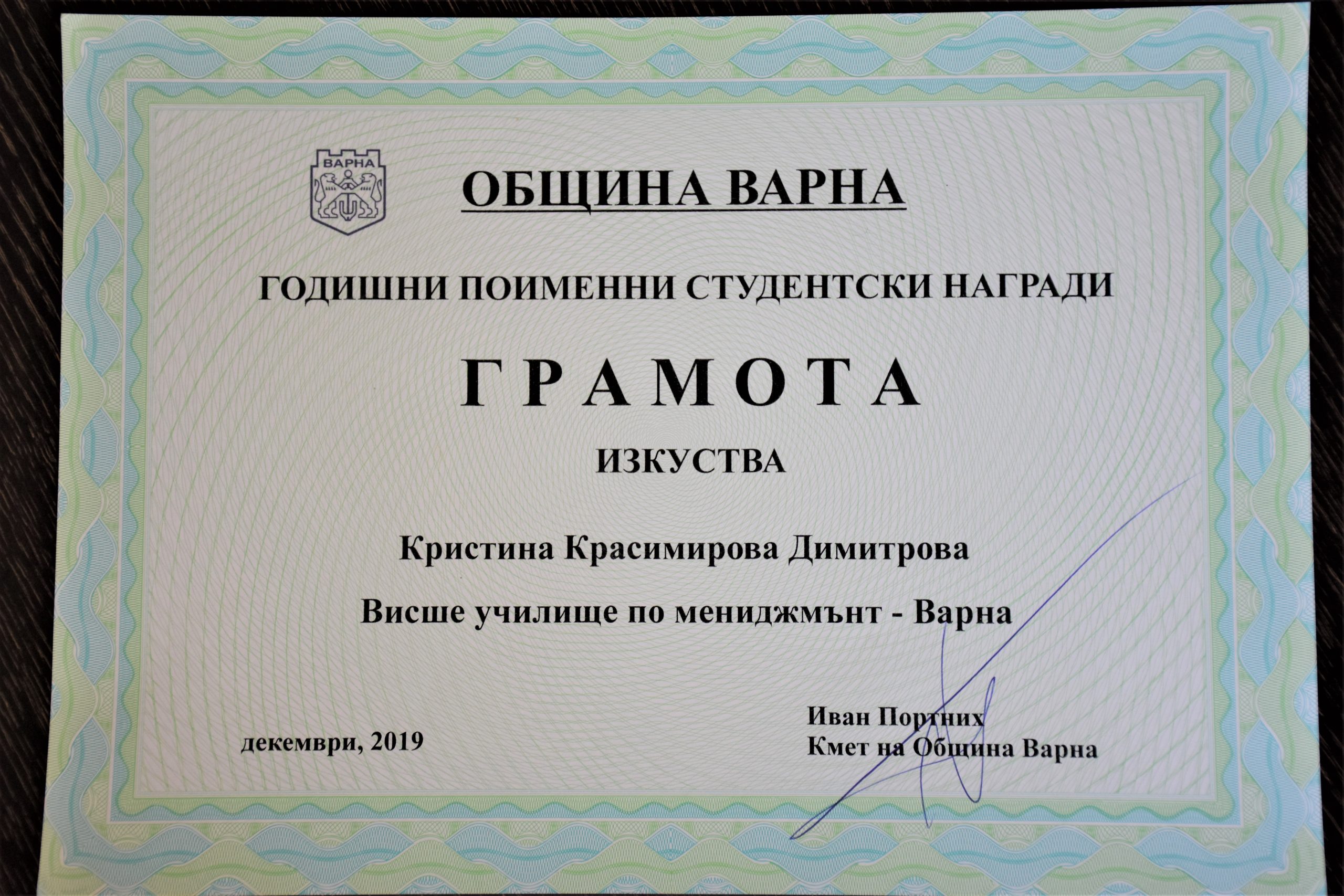 At the beginning of the December holiday season, eight students were awarded by Varna Municipality for high results in various fields at international and national levels.

Among them was the student in the final year of the Hospitality and Culinary Arts Programme Kristina Dimitrova at Varna University of Management, who was unanimously selected as the winner in the category “Arts”.

Kristina Dimitrova is a student who has achieved impressive results over the past year, but not without a lot of hard work, persistence, dash and of course, talent. Her success on the local, national and international level, has a positive effect on the image not only of Varna University of Management as an educational institution, but also of the city of Varna as a hub for creative and innovative young people and incubator of highly-qualified and valuable staff in the field of tourism and hospitality.

Kristina Dimitrova’s first big achievement was the silver medal in the Student Pastry Chef of the Year category of the 11th International Culinary Competition of Southern Europe, held in Thessaloniki, Greece in March 2019. The prestigious event is organized every two years from the Chefs Association of Northern Greece in collaboration with Thessaloniki International Exhibition and Conrgress Centre, HELEXPO and is supported by the World Association of Chefs Societies (WACS). The VUM Culinary Arts Institute team, part of which was Kristina, was the only one representing Bulgaria and competed in conditions of fierce competition with participants from Greece, Serbia, Turkey, Cyprus, Ukraine, Latvia, Mongolia and Taiwan.

Only a month later, Кristina was selected to participate in a master class on contemporary pastry of the “king” of the French Pastry Chef Pierre Herme, who was visiting Sofia at the invitation of the French Institute in Bulgaria. Only five young Bulgarian pastry chefs selected in advance by “Relais Desserts” Association were admitted to the course, and Kristina was the only student in the competition of distinguished Bulgarian pastry chefs with experience in elite restaurants.

Kristina’s undisputed triumph was the title “Pastry Chef of the year” at the Bulgarian Culinary Cup 2019, held in the city of Plovdiv in April. The talented young Chef has also set a new record in the history of the Bulgarian National Culinary Cup, winning two more awards in the categories “Best Chocolate Sculpture” and “Best Restaurant Dessert”. The theme of the chocolate sculpture, which Kristina presented, was extremely contemporary, namely “Preservation of the environment and the impact of plastic in the modern world”. She made up the whole idea of ​the vision and the message of the culinary masterpiece. The most impressive in the preparation of the sculpture was that all its parts were edible, made from high quality Belgian dark chocolate.

In the past year, Kristina also participated in a master class of the talented Bulgarian pastry chef Ivan Alexandrov. Chef Alexandrov develops his own brand – Boutique Cookie’s Cakes in London, where he creates unique boutique cakes and cakes to order. An interesting fact that proves his undisputed class and worldwide recognition is that in 2018, he was invited to make the second most important wedding cake for Prince Harry and Megan Markle – the cake for journalists from all around the world accredited to cover the glittering royal event.

All these successes, as well as the experience gained during her internships abroad – at the elite restaurants “Meo Modo by Andrea Mattei” (one Michelin star) in Italy and “Vila Joya” (two Michelin stars) in Portugal – impressed the jury and led to another title for Kristina – Student of the Year for 2019 in the Arts category.

We wish Kristina many more victories because she is a good example of how the steadiness, hard work and dedication lead to high results. And to all students of Varna University of Management, we wish the articles about success and victory in the upcoming year to be devoted to them!